Braselton, Ga. (7 October 2017) – What looked to be a strong run to the finish of the 20th annual Petit Le Mans for the No. 90 VISIT FLORIDA Racing Gibson powered Ligier JS P217 at Road Atlanta on 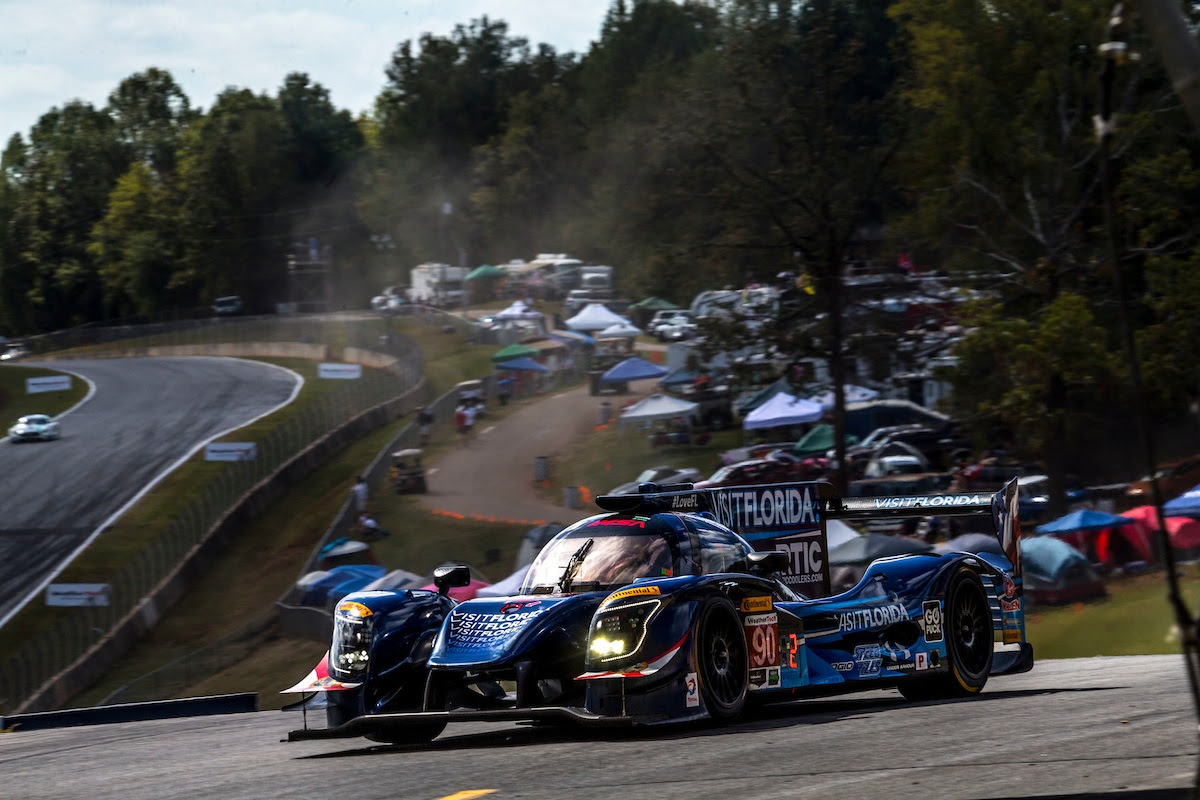 Saturday, ended in heartbreak as the team was forced to retire the car just 25 minutes from the end of the 10-hour race.

Hoping to build on the team’s victory in the previous IMSA event at Mazda Raceway Laguna Seca, the trio of Renger van der Zande, Marc Goossens and Mazda Motorsport’s Jonathan Bomarito combined for a strong run through 389 laps of competition for the Ligier Prototype. van der Zande delivered a strong first stint after starting from fifth on the grid and was able to manage his Continental tires well. He expertly maneuvered through traffic and moved up to third before handing the car over to Goossens.

Following the pit stop, “The Goose” worked to bring the No. 90 VISIT FLORIDA Racing machine back 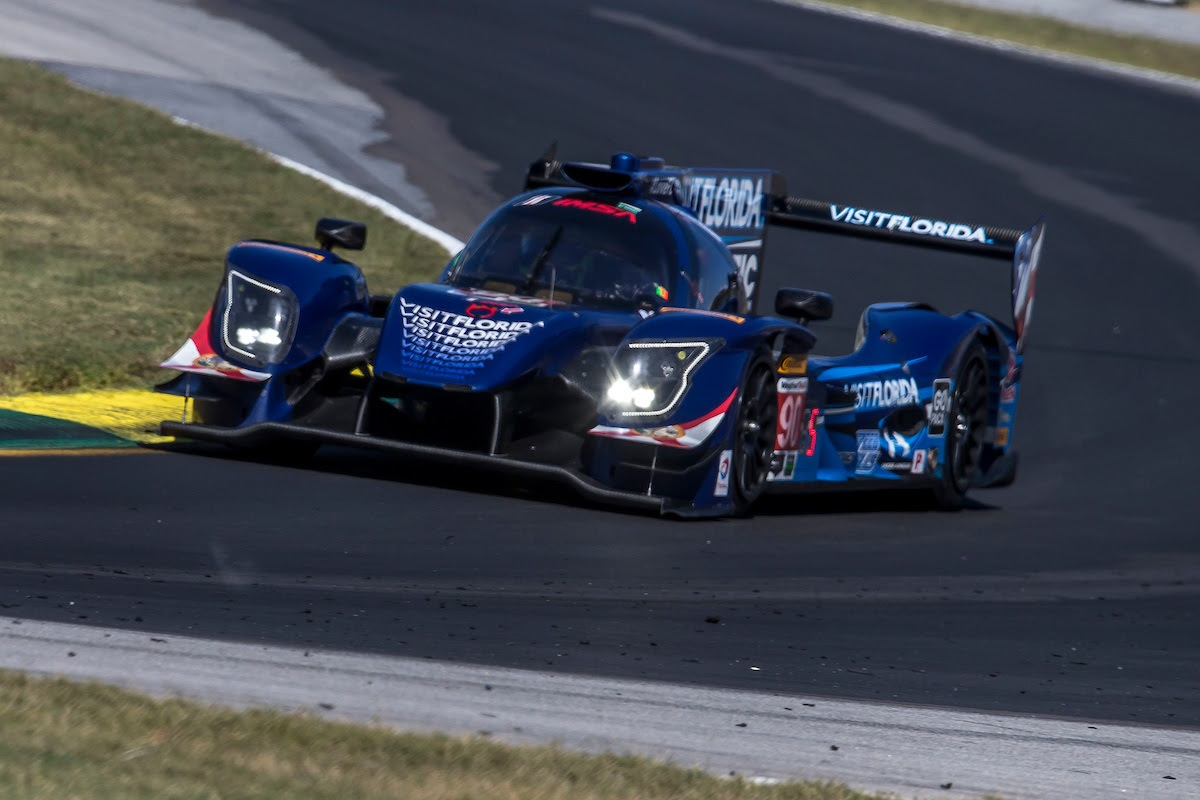 up through the field but was hit by the No. 6 Prototype which caused damage to the exhaust. As the race elapsed, that damage began to hinder the car’s power output.

“During my second stint everyone started to fall into place and it became more about strategy and pit stops,” said Goossens. “Unfortunately, with the contact that we had with the No. 6 Prototype we had damage to our exhaust. I wasn’t defending when we came into contact because I knew he was much quicker on the straight. We lost power at one point and towards the end, the whole car was overheated. Renger (van der Zande) was great in the beginning of the race and could keep up with the leaders.”

Bomarito – who was on loan from Mazda Motorsports for the IMSA WeatherTech SportsCar Championship finale – hopped in the car just after the halfway mark and stayed right on pace despite his limited time behind the wheel of the Ligier chassis. Bomarito moved from sixth to third on the 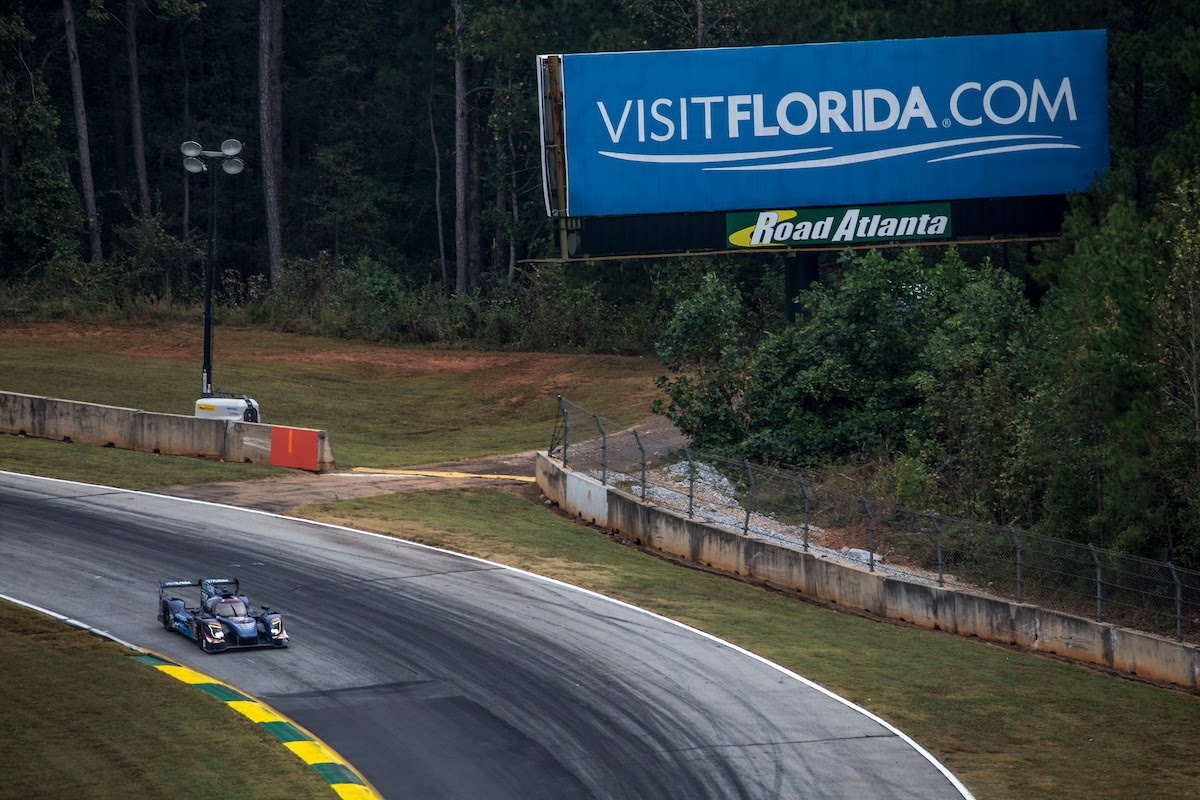 During the final stages of the race the team endured rising temperatures in addition to substantial power loss from the exhaust damage. van der Zande, who was tabbed as the team anchor, did everything he could to make it to the checkered flag, but the team made the decision to bring the car behind the wall before the rising temperatures escalated.

“We were always right there and in it for the fight,” said van der Zande. “I was sure that the last three stints were going to be good but the car let us down a little bit. The exhaust was damaged and we lost a lot of power. We tried to bring it home but at the end it almost completely stopped. The VISIT FLORIDA team did a great job. The year that we have been through together has been incredible. Turning it around the way that we did is something special.”

Bomarito was a welcome addition to the team and though disappointed with the end-result, was pleased with his sixth Petit Le Mans event.

“Overall it was a great experience driving in the 20th Petit Le Mans with VISIT FLORIDA Racing,” said the Mazda Motorsports driver. “I really enjoyed being a part of the VISIT FLORIDA team. They did a great job and everybody was very welcoming. I had a lot of fun. It’s a shame that we missed finishing the race by just 25 minutes. I had a ton of fun, it was a great experience and I learned a lot working with them.”

Though not the result the team had been looking for, VISIT FLORIDA Racing team owner Troy Flis is proud of the improvements that the team has made especially with how quickly the crew and drivers were able to adapt to a new chassis change midway through the season.

“We had a couple of impacts from other cars there in the middle of the race and sure enough with the contact from the No. 6 Prototype – it broke the header,” said Flis. “We knew it broke but we didn’t know how bad it really was. It’s too competitive in this race to stop and put headers on so we tried to limp it home and stay out but it just got worse and worse. It got to the point that we were just going to blow the motor up and we had to stop. It’s disappointing for the VISIT FLORIDA team, these guys have worked incredibly hard all year. It was a decent end to the year with the win at Mazda Raceway Laguna Seca – that was great. We had a car that would have been competitive today and would have had a top-three finish for sure. But we’ll rub elbows next year.”