EVENT: Round 6 of the IMSA WeatherTech SportsCar Championship, 6 Hour Race

TRACK: 3.4 miles long, 11 turns located in the Finger Lakes region of New York at the southern tip of Seneca Lake

HONORING OUR TROOPS: In celebration of the fourth of July, the No. 90 VISIT FLORIDA Racing Riley-Gibson will feature a new paint scheme – a camo blue with branding from each of our military 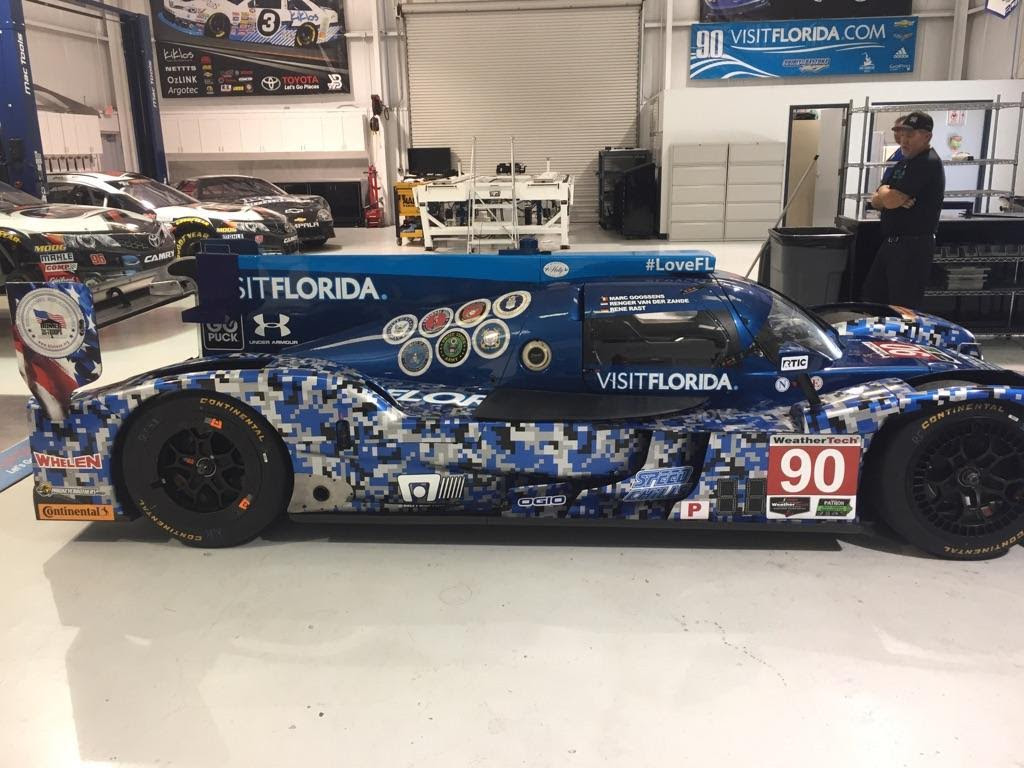 branches. All veterans and those currently serving in the military are invited to sign the car during the Fan Walk on pit lane Saturday which begins at 9:00 AM.

TEAM HISTORY AT THE GLEN: VISIT FLORIDA Racing has made 13 previous starts in the Sahlen’s 6 Hours of the Glen. Highlights at the Glen include back-to-back victories in 2014 & 2015 when Richard Westbrook and Michael Valiante teamed in the No. 90 Corvette DP. The Florida-based team also took a podium finish of third in 2010 when Antonio Garcia and Buddy Rice drove the No. 90 Porsche Coyote.

SAHLEN’S 6 HOUR CHAMPIONS: Renger van der Zande and Marc Goossens are both previous winners of the Sahlen’s 6 Hours of the Glen. Goossens won the event in 2015 driving for Riley Motorsports in the SRT Viper while van der Zande won in both 2015 & 2016 driving in the PC class for Starworks Motorsports.

NEW IN 2017: With all-new regulations for the top Prototype class in 2017, VISIT FLORIDA Racing fields a Gibson-powered Riley Mk. 30. The Gibson engine is a 4.2-liter V8, and is the specification engine for all competitors in the World Endurance Championship LMP2 category. Riley Technologies has an unparalleled history in the sport, and the 2017 Rolex 24 At Daytona marked the competition debut for the Mk. 30.

MICHAEL HARVEY: Prior to the 2017 season, VISIT FLORIDA Racing added Michael Harvey to the team as Director of Race Operations. Harvey, who has a long and varied range of experience in the sport, most recently managed the competition efforts for Fall-Line Motorsports’ multiple-championship winning programs in IMSA and SCCA competition as well as serving as a Series Director for the Pirelli GT3 Cup Trophy USA series.

MARC GOOSSENS: “I have always been a fan of Watkins Glen. It is probably one of my worldwide favorites. Last year everything changed because the track had some new pavement and there was a huge amount of grip. I can’t wait to go back with the new P2 cars. They will be really quick and challenging around there! I’m really looking forward to a strong result with the VISIT FLORIDA team and my co-driver Renger (van der Zande). I think everyone agrees that we deserve a break!”

RENGER VAN DER ZANDE: “Watkins Glen is an amazing event. It is one of the four big races – the long distance races that we go to. It’s very exciting and it’s always a bit of an extra factor when the endurance part plays in. We are hoping for a proper result for this event after some bad luck at Detroit. We are continuing to extract the most out of what we have and I think Watkins Glen could be very interesting. It is a very special track with a lot of grip and high speed corners that could suit our car pretty well. That said, the long straights are a bit of a disadvantage for us so it will be interesting to see how it all plays out. Straight after the Glen, we go to Mosport (Canadian Tire Motorsport Park) which is one of my favorite tracks in the world – it’s very challenging and just an old school track. With not much time between races, we’ll need to stay clean at the Glen and make sure we don’t have any issues. We will race hard at Watkins Glen and try for the maximum result in the race.”