Daytona Beach, Fla. (2 December 2016) – As the IMSA WeatherTech SportsCar Championship prepares to open a new and exciting chapter of Prototype competition, VISIT FLORIDA Racing has been preparing for the new era of the sport. Those preparations won’t just involve the team’s new machines, as VISITFLORIDA Racing is pleased to announce the appointment…

Daytona Beach, Fla. (2016 November 14) – VISIT FLORIDA Racing has secured a new driver pairing to campaign its all-new car for the 2017 IMSA WeatherTech SportsCar Championship. Set to share the No. 90 VISIT FLORIDA Racing Gibson-powered Riley Technologies MK XXX, the team will feature a new driver line up in 2017 with Marc Goossens returning to the squad after debuting with VISIT FLORIDA Racing for a full season campaign in 2016. He will be joined by Dutch racer Renger van der Zande in the Gibson-Riley. The 2016 IMSA PC class champion steps up to the Prototype ranks following several years of PC and GT class competition.

VISIT FLORIDA Returns as Primary Partner in 2017 Daytona Beach, Fla. (10 November 2016) – The anticipation continues to grow ahead of the 2017 IMSA WeatherTech SportsCar Championship season, which will open the next era in Prototype competition with all-new regulations for the top Prototype class. When the green flag flies for the 2017 Rolex…

Braselton, Ga. (1 October 2016) – With the 2016 Petit Le Mans setting the stage for the final race of the Daytona Prototype era, longtime DP competitor VISIT FLORIDARacing had been hoping to close out the 2016 IMSA WeatherTech SportsCar Championship on a high note. Unfortunately for the team that finished runner-up in last year’s…

ROAD ATLANTA: At 2.54-miles long with 12 turns, the popular road course is located outside of Atlanta, Georgia. This year’s Petit Le Mans marks the 19th running of the event.

RACING FOR RETT: Besides chasing trophies, Dalziel used is long day at COTA two weeks ago in which he raced in both the IMSA and WEC endurance events to raise awareness and funds for the Rett Syndrome Research Trust, something that is close to his heart. Fans are encouraged to visit https://reverserett.org/donate/.

Dalziel will be auctioning off one of his race suits as well as several other items from the weekend to raise funds for the Rett Syndrome Research Trust.
To view the items up for auction and to enter the raffle, visithttps://rafflecreator.com/pages/7192/ryan%E2%80%99s-rett-razzle-dazzle-double-weekend

NEW LOOK FOR VISIT FLORIDA RACING: Beginning at COTA, the No. 90 VISIT FLORIDA Racing Corvette DP had a new look. The first of its kind, Hawkeye Brothers Signs and Graphics applied HaloEFX liquid vinyl/peelable paint that changes color in the sunlight to the car. Look for the new changing chrome blue colors under the sun this weekend. 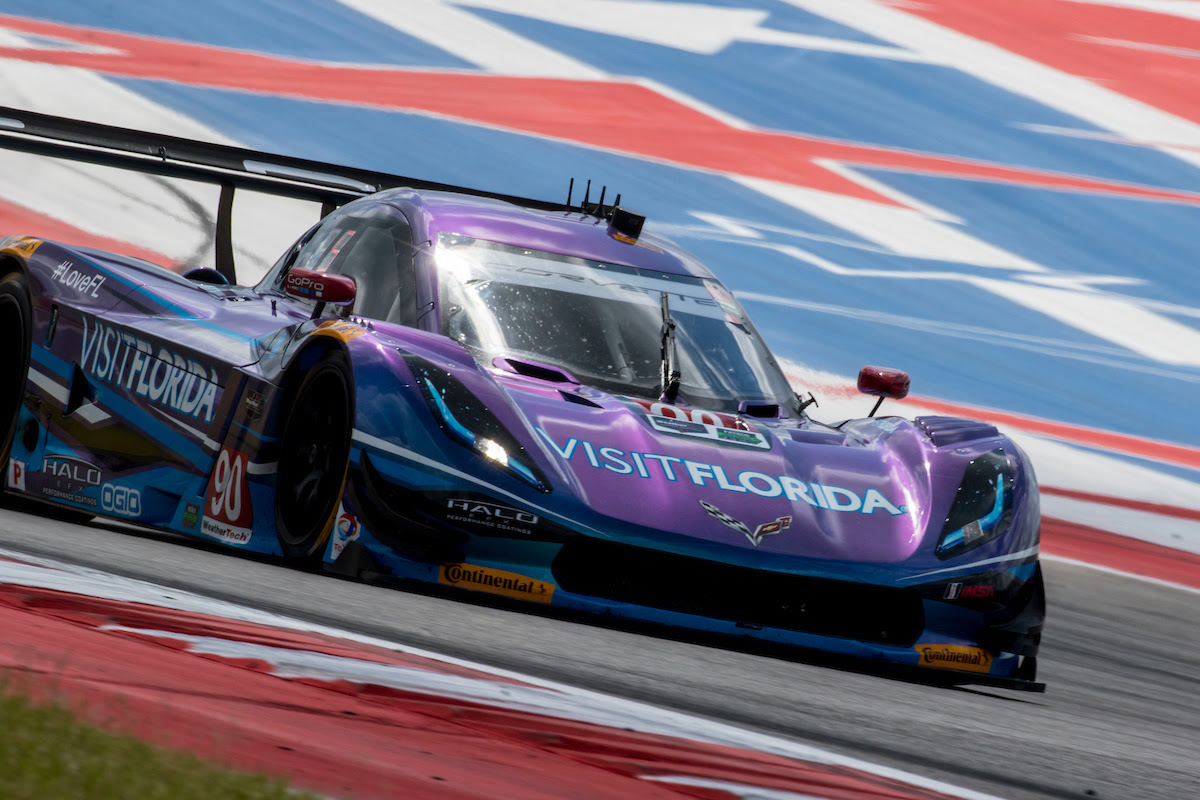 WELCOME BACK RYAN: Ryan Hunter-Reay returns to VISIT FLORIDA Racing for the season-finale event. He also joined the team in this year’s Rolex 24 At Daytona, 12 Hours of Sebring, and Long Beach Grand Prix. He competes full time in the Verizon IndyCar Series for Andretti Autosport.

DRIVER HISTORY AT ROAD ATLANTA: Both Ryan Dalziel and Marc Goossens have made several starts at Road Atlanta dating back to the early 2000s. Dalziel won the Petit Le Mans event in 2012 while driving for CORE Autosport. Goossens’ took his best finish of third in the event in both 2014 and 2015 driving for SRT in a Dodge Viper. Ryan Hunter-Reay was a teammate of Marc Goossens for that third place finish in 2014. He’s made three starts in the Petit Le Mans since his 2011 debut in the event with Level 5.

A LOOK BACK AT COTA: After the car lost drive early in the race at Circuit of the Americas, VISIT FLORIDA Racing made repairs and returned to the track. The team used the remaining race time as a test session for the Corvette DP in preparation for this weekend’s Petit Le Mans.

PROMOTING PETIT: The No. 90 VISIT FLORIDA Racing Corvette C7 DP “two-seater” car has been on display at the Mall of Georgia to promote the Petit Le Mans event. Georgia shoppers have been able to get an up close look at the No. 90 VISIT FLORIDA car to help raise awareness of the final round of the 2016 IMSA WeatherTech SportsCar Championship on October 1st. 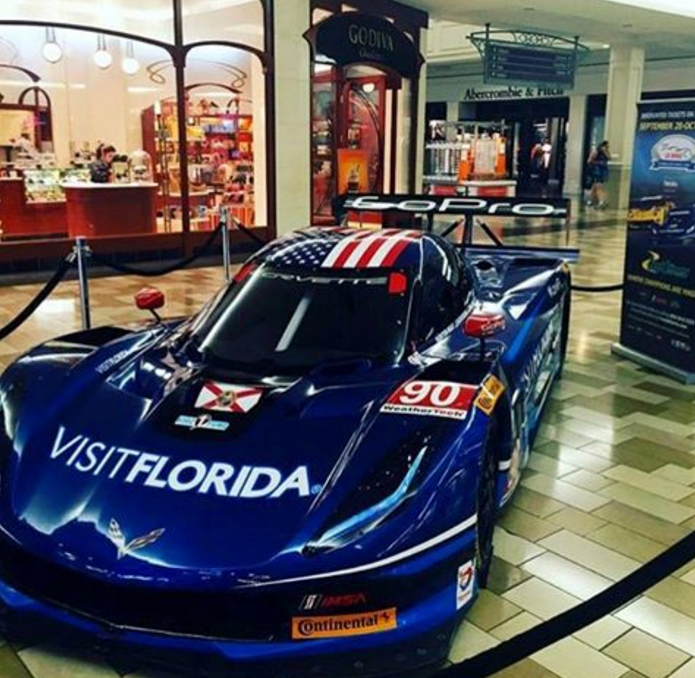 The two-seater will be in action at Road AtlantaWednesday morning. Contest winners from a promotion put on by ROCK100.5 “Atlanta’s Rock Station” will receive laps around the track from Marc Goossens. Several media members will also have the opportunity to lap the 2.54-mile track in the Corvette DP.

DRIVER QUOTE:
Ryan Dalziel “I’m really looking forward to Petit Le Mans. Although it’s been a tough season for Visit Florida Racing and the Austin race was particularly disappointing, we will be doing our best to finish the season off on a high note. We have Ryan Hunter-Reay joining us again so our lineup is as strong as anyone’s. We had a great test at Road Atlanta a few weeks ago so hopefully what we learned there will transfer over to our pace for this week.”

Marc Goossens “I like Road Atlanta a lot. It’s again one of the old school tracks and it is not a very forgiving place. Cool elevation changes, combination of low and high speed corners. The race itself has become one of the major endurance races worldwide. We had a pretty strong test there a couple of weeks ago, and I hope that we can roll off the trailer in pretty good shape. It is a long race and a lot can go wrong so we need to find the right speed and stay out of trouble at the same time. I’m sure that the team who handles traffic best will come out on top after 10 hours.”
WEEKEND SCHEDULE:

VISIT FLORIDA Racing Perseveres to the Finish in Texas

Austin, Texas (17 September 2016) – Hopes of a return trip to the Circuit of the Americas podium for VISIT FLORIDA Racing went unfulfilled on Saturday when a driveline failure on the No. 90 Corvette Daytona Prototype took drivers Marc Goossens and Ryan Dalziel out of contention for a top-three run. Goossens opened the race…